Decontamination (disinfection) of drinking water is carried out with a view to ensure the epidemiological safety and to prevent passing the infectious agents through the water.

In wastewater systems as well as in circulation water supply systems of industrial enterprises and energy utilities the formation of biofilms on the pipelines and heat exchange equipment leads to decreasing in heat transfer and in the capacity of pipelines as well as to faster corrosion.

For water decontamination in the industrial-scale production, reagent (chemical) and reagent-free (physical) methods are used.

Other reagents and methods of water decontamination have not found industrial application due to various reasons: technical complexity, economic inexpediency, fall-outs.

In terms of decontamination effect, it is not inferior to chlorine. The cost of 1 kg of active chlorine in electrolysis hypochlorite ranges from 35 to 45 RUR that is several times lower than in chemical hypochlorite. Obtaining a decontaminating agent at the point of consumption provides high economic indicators, reducing the cost of decontamination. The production technology is far easier and safer than in the case of chlorine dioxide, because there are no substances of I-III hazard classes in the technological process. Dosing safety is ensured by the usage of modern automatic equipment.

Thus, in terms of the ratio of capital and operating costs, the safety of the technological process and the provision of prolonged protection of water from secondary pollution, the offered technology has no analogues.Buy electrolysis installations for sodium hypochlorite here..

At the same time, the membraneless electrolysis method is characterized by its flexibility in application, resistance to low-quality salt and the absence of production by-products.

In terms of decontamination effect, it is similar to chlorine, but it is devoid of its disadvantages - it does not pose such a danger to the environment and human health. Nothing else than the installation of capacitive and dosing equipment is required for its application, however, the unit cost of 1 kg of active chlorine in chemical hypochlorite is much higher than that of chlorine itself. The logistics makes a significant contribution to operating costs, which, in the case of transportation over a distance of more than 200 km, makes chemical hypochlorite really the "golden" one.

A-grade hypochlorite has a concentration not higher than 19%, i.e. the target product content is only 190 kg per 1 ton of transported cargo. At the same time, chemical hypochlorite is unstable and loses up to 30% of its activity in 10 days, which excludes the possibility of a one-time wholesale purchase.

Chlorine is, in fact, a chemical warfare agent, which implies difficulties with its storage and usage, both technical and organizational. It is also necessary to note the high costs of transportation from the production plant to the location. Capital costs are minimal, operating costs depend on the cost of commercial chlorine.

In terms of disinfection properties chlorine dioxide surpasses even chlorine. It is obtained on-ground by the electrolysis method; however, a large number of aggressive chemical compounds are used in the production process. Chlorine dioxide forms a large amount of by-products - chlorates and chlorites.

UV has such an important advantage as the absence of fall-outs, however, it has high capital and operating costs (electricity), has a number of limitations (it sharply loses its effectiveness in turbid water, or at a high concentration of iron, etc.). The most significant disadvantage is the lack of prolonged effect, i.e. the possibility of water recontamination after decontamination.

Ultrasound provides complex water decontamination, destroying all types of microorganisms. However, high capital and operating costs, as well as the complexity of equipment operation, do not allow this method to be widely used. 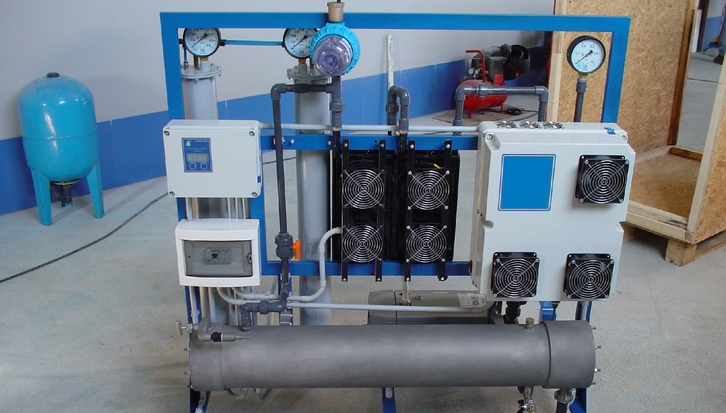 Ozone is a strong oxidant agent. Penetrating through the membranes of microorganisms, it destroys the cell walls and kills it. Since ozone is an extremely unstable compound - its lifetime is no more than 20 minutes, -its antiseptic properties disappear, and the water can be contaminated all over again. The disadvantages include high corrosive activity, which leads to damage of pipelines and the need for high dosing accuracy (since ozone excess leads to the formation of toxic compounds). Ozone treatment is characterized by high capital and operating costs.